When I woke up from my second nap yesterday Todd and I got to work prepping some dishes for tonight’s dinner with my parents and brother.  Since we’ll have just less than an hour and a half after work before they come over we thought it would be a good idea to do what we could ahead of time.

As we were planning the menu for tonight’s meal we tossed around a few different ideas: barbecue, all appetizers, tapas.  Finally we settled on a fusion of all three, a small plates dinner.

Small plates are one of my favorite things because I hate making decisions.  I’m always torn when ordering at restaurants then I make my selection at the last second, as the waitress’ patience is wearing thin.  I’m excited to offer my family a variety of options this evening.

First on the menu are Apricot Bites based on a recipe from Sandy at The Reluctant Entertainer.  If you don’t read her blog, check it out.  She’s doing a series on summer entertaining right now that’s really interesting and informative.  Check it out!

I slightly altered the recipe, using honey goat cheese instead of goat cheese and honey.  Also, I left out the milk but that was mainly because I somehow missed the step.  My cheese spread fine with a little coaxing but I’d recommend trying them with milk for easier spreadability.

I refused to tell my family exactly what we’re having so I’ll save the photos of the finished product for later.

I also prepped the dough for dessert.  For some reason I had it in my head that dessert was going to be churros.  Churros were the only thing that would do.

If you’ve never had churros, you should try them.  For me, they bring back memories of a family vacation to Disneyworld, where they serve them in the Mexico section of Epcot Center, and of Barcelona where they’re served with the most delicious, rich, thick hot chocolate – it is the most perfect dish for a chocoholic like me.

Anyways, I decided to make churros, which are usually fried.  I was able to find a recipe for baked churros on Cooking With My Kids.  Sorry vegans, this recipe is full of eggs – do they make some kind of egg subsititute so you can enjoy the deliciousness that’s churros too?

The churro batter whipped up nice and thick and I decided that I should bake a few, just to make sure they were good enough to serve. 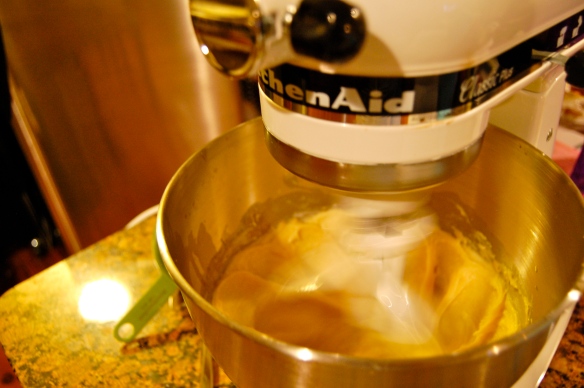 After baking a few churros and coating them with cinnamon sugar, I can promise you that these churros were worth making.  They were delicious, like little baked doughnut sticks.

As an added bonus, my friend Mary-Catheryn will soon be launching her own homemade dulce de leche company, Catarina.  I’ve been lucky enough to eat lots of dulce de leche in my time and this stuff is the real deal.  It is the best dulce de leche I’ve ever had stateside (and maybe abroad too).  I promise to let you know when she’s officially open for business.  You will want to buy this stuff by the boatload and slather it onto mostly everything you eat: bread, ice cream, bananas, any and everything.  The you’ll want to bake it into cookies or cupcakes and make one dish dessert with meringue drops and strawberries and top it with her dulce.  And then, since too much dulce could never be enough, you’ll want to eat it by the spoonful.

I highly recommend all of the aforementioned methods of eating Catarina dulce de leche. 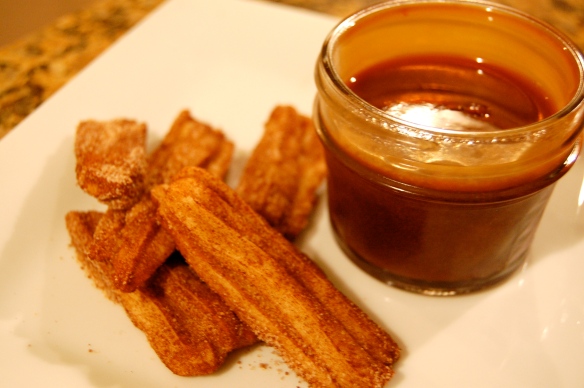 Not long at all.

I can’t wait to share these foods with the family and I have more small plates to tell you about so stay tuned to see what’s on our menu for tonight.

Do you have a heard time choosing one thing for dinner?

What are some of your favorite dishes for entertaining?