Todd and I are currently sitting side by side on a plane that’s scheduled to land back home in 15 minutes. Unfortunately, the greater Chicago area is experiencing a “weather event”. The delay was about an hour but the captain is now announcing that eastbound flights are not being allowed to depart until further notice. Oh well, thems the breaks.

Happily, the rest of our travel today was been great. We were waiting to board our first flight when we were asked if we’d be willing to volunteer to take a later flight. Since we would still have time to make our connection and we were offered travel vouchers, it was a no-brainer.

When we boarded our flight, only an hour behind schedule, we were delighted to find that our seats were in the Economy Plus section of the plane. Five extra inches of legroom? Yes, please!

As if that weren’t enough, we were presented with a medley of warmed nuts shortly after take off. 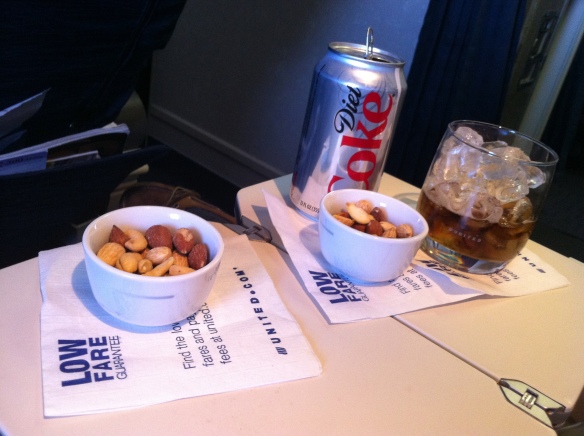 Unexpectedly, we were served lunch later in the flight. A turkey sandwich, salad and chips seem quite fancy on an airplane when served on linens with actual metal silverware. 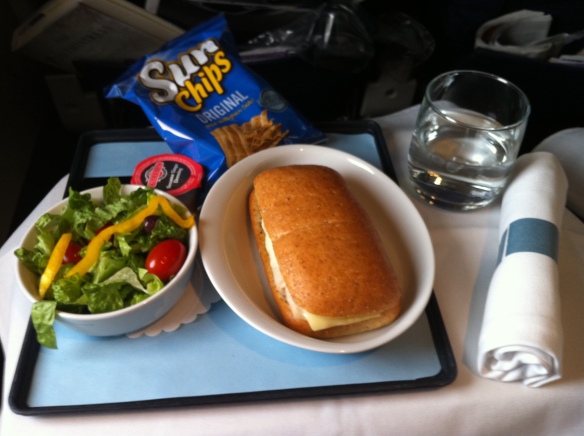 We were feeling quite high class at this point. Honestly, it was even better than when we flew first class on our way to Cancun. To top things off, we were given freshly baked chocolate chip cookies after lunch. Nothing makes me happier than fresh, warm cookies.

Nice work, United. Thanks for the upgrade! We really lucked out.

Here on our current flight the engines have been shut off again after a takeoff false alarm. Hopefully we’ll be leaving soon though and its not so bad since we both have a goos book in hand. Wish us luck! From a runway in Chicago, this is Kate, signing off.

Have you ever volunteered to be bumped off a flight?

Error: Twitter did not respond. Please wait a few minutes and refresh this page.